No Result
View All Result

No Result
View All Result

Meet a Local in Kyoto: Ken

Ken speaks of the history and culture of Kyoto with a passion that would make you think he’s a lifelong resident of Japan’s historical former capital city.

But the self-described country boy has followed a road with more than a few interesting twists and turns via Canada and America as he has made his way from Fukushima prefecture, where he was born and raised, to Kyoto.

With its rich array of cultural and historical sites, Kyoto was the perfect location for Ken to set up shop in his quest to introduce people to Japanese culture and traditions.

Raised in a very traditional Japanese family environment (the rice fields that his grandparents worked have been in the family for over 100 years), Ken had an early introduction to the richness and uniqueness of Japan’s culture.

Ken himself admits that as a young man he didn’t really appreciate this, but as he looks back, he credits both his traditional upbringing and his travels for creating the spark that sent him on the way to his current venture.

The first twist in Ken’s journey came when he was in high school. He was at home during the school holidays when the 2011 earthquake that devastated Fukushima prefecture, and Ken’s hometown of Iwaki,struck.

Roused by his parents, they managed to evacuate the house as the shaking made it almost impossible to stand. Ken was wandering toward the coast when he happened across a senior student from his school, who warned him against staying in the area and of the potential tsunami.

Moving to a nearby hilltop, it was from here that Ken witnessed the tsunami’s trail of destruction as it literally swept houses away before his very eyes.

“The realization of what this all meant and the sadness at the loss of life didn’t hit me immediately, it was like a scene that you only see in a movie.

It was only the following day as I walked about and started hearing the names of people who hadn’t survived and seeing people who needed help that I became aware of the magnitude of the disaster, and also of the fact that there was very little that I could do to help.”

Ken did spend some time as a volunteer, offering what help he could, and was struck by the willingness of people to assist and donate what they could.

This led to Ken’s participation in a Softbank sponsored study tour to California,arranged for young people affected by the disaster. Meeting and hearing the stories of people at places like UC Berkeley, Google and E-Bay, Ken was struck by how passionate and driven they were at achieving their goals.

It was his first introduction to cultures outside Japan and served as an eye opener to the world around him. It also got him thinking about where his future might take him.

Ken found himself following his love of snowboarding. He spent time in the snow towns of Nagano and Hokkaido, working part time and offering snowboard lessons as he went.

With so many foreign visitors during winter, Ken found himself with a growing interest in English.

“Hakuba (in Nagano prefecture) is like a foreign town in winter, all you hear is English. It’s like being at an English language school all day.”

With aspirations of becoming a pro-snowboarder and mastering his English abroad, Ken made his way to the Whistler snowfields of western Canada. Despite his best intentions, after a year Ken found himself not making progress.Not wanting to return to Japan without achieving either of his goals, he doubled his resolve to learn. Removing himself from the safety net of the Japanese working holiday community, Ken took the plunge and decided to hitchhike his way around Canada, heading all the way across the continent to Nova Scotia and Prince Edward Island.

“It was quite a daunting thought, I had never left Whistler and didn’t really know Canada, and the idea of hitchhiking was quite scary. I even put together final messages for my family and friends, just in case the unspeakable happened.”

Ken bought a video camera and recorded tearful messages telling his parents how much he loved them and saying a final thank you to friends.  Whilst his journey was not uneventful, the recordings were never viewed, and to this day even his parents aren’t aware that they exist.

Despite the initial nerves, the opportunity to pursue his goal drove him on.

“I would sometimes visit the same town repeatedly just because someone was willing to speak English with me as they drove. I also learned that you can’t learn English from truck drivers though, they’re used to hitchhikers and don’t talk much.”

After walking across the US-Canada border, which included a 6-hour immigration ordeal that Ken considered an English lesson, he hitchhiked again down through Maine, Boston and New York to Washington DC. He then headed across the country to California.

The journey exposed him to many experiences, including dubious ones such as being picked up by drug runners and getting held up at knife point, and it is a journey during which he made many friends.

It also dawned on him the realization that he really didn’t know much about his own country’s culture and history.

“I couldn’t answer basic questions about Japan’s culture or religions. I didn’t even know the population of my own country.”

Wanting to embark on a course of study of Japanese culture, as well as continue speaking English, Kyoto, with its history and the high number of foreign visitors, seemed just the right fit. Within a week of returning to Japan Ken had set himself up there.

“As I studied and learnt more about Japan, I was able to relate personally to the way of life I had as a youngster. I could see the value of those traditions and how they influence Japan today. Not only that, it grew in me a real fascination with Japan and a desire to share that knowledge.”

Ken then started offering free tours, relying solely on tips for income. But over time, as the quality of his tours improved, he was able to introduce fees for his services and grow his business.

“There are, of course, a lot of foreign visitors in Kyoto. Along with Tokyo, the Osaka/Kyoto/Kobe area is Japan’s other main metropolis and it has all the facilities that make access easy for foreign visitors. But unlike Tokyo, many of Kyoto’s attractions are within a compact area of the city, making it easier for foreign visitors to enjoy a walking tour.”

When asked about what he wants his customers to gain from their experience, Ken speaks with a genuine desire for visitors to have a real appreciation of Japan, and to leave the tour having not only enjoyed themselves but wanting to learn more.

And then there’s humor, something that Ken rates as an important part of a Kyoto walking experience with him. 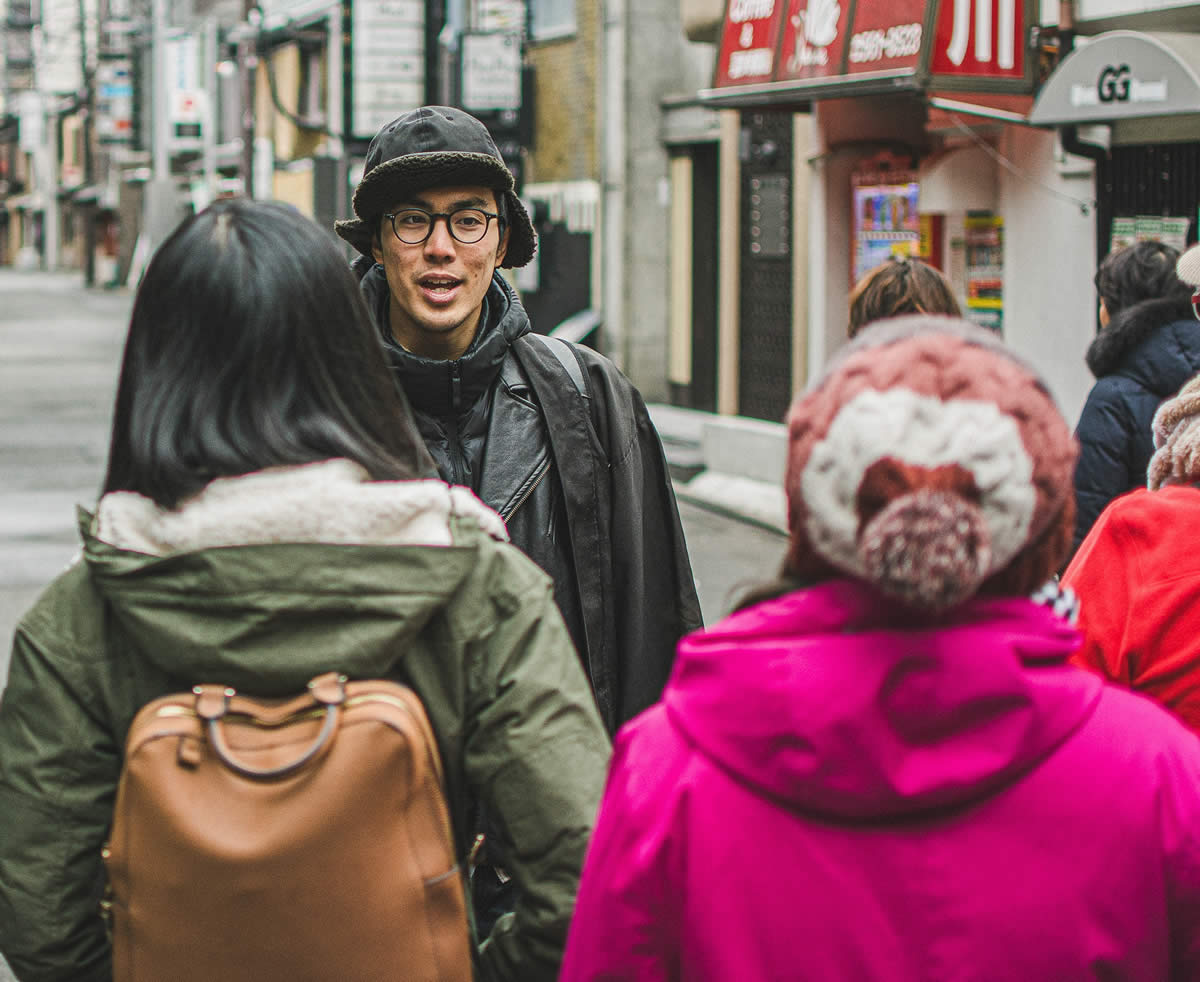 “My dream is that my guests are laughing and having fun for the entire 3-hour walk. I guess that makes me a walking stand-up comedian as well, although the comedian part is perhaps still a work-in-progress.” He adds with a wry smile:“That said, getting people to laugh for 3 hours is really hard work.”

When we talk about the specifics of his tours, Ken speaks only briefly of the various places along the way. He focuses more on those small unexpected sites that have a hidden story.

He wants to introduce not just places and history, but also the Japanese people and how Japan’s culture and religion have shaped the Japanese way of thought.

“I really want to introduce the personal side of who the Japanese are. It’s my mission to make this the highlight of your visit to Japan and it’s what I strive to achieve for every one of my guests.”

One is left in no doubt that Ken is a man who is passionate about the experience he offers to visitors to Kyoto. I can’t help but sense that his comment about his tour being a highlight is not made lightly, but is a commitment that he is personally making to every guest.

Meet A Local in Tokyo: Aya

Meet A Local in Tokyo: Hirotaka

Meet a Local in Tokyo: Frank, a Ramen Expert

Meet A Local in Tokyo: Yumi

Izakaya and Karaoke – A night out in Tokyo like a local

What is ‘Kawaii’ Culture in Japan?

Izakaya and Karaoke – A night out in Tokyo like a local

A crash course Japan trip plan by a local

Staying at a Ryokan in Japan: Travel Tips & Useful Japanese words for your stay

The Kyushu Bucket List: Things to do in Japan’s Southern Island